Spend time in Nature, Make memories with your Family.

On Free Fishing Weekend our family headed to the west side of the state for a quick weekend getaway. We stayed just north of Grand Haven at the Hampton Inn in Norton Shores. They had great rooms, free breakfast and an indoor pool. (We got a lot of use out of the pool since the weather turned out less than ideal for the weekend.)

Friday night we spent time playing at Grand Haven State Park. The temperature was in the low 70s and it was overcast and windy, so we had the beach to ourselves! We flew a kite, dug holes with our new sand toys, played catch and our son joined a game of volleyball with some sweet teenage girls.

The beach is very popular and and get quite crowded in the summer, so it was nice to have so much room with a beautiful view of the Grand Haven Lighthouse. We spotted a number of different Gulls on the beach and our daughter decided to try to chase a few of them down. I had a hard time identifying one of them. The mostly white gull with the black tipped beak. It was quite a bit bigger than the Ring-billed Gull. Possibly a Glaucous Gull?

The gull that landed on the top of the swimming area buoy looks like a Herring Gull. Larger than the Ring-billed Gull and has an all black, slightly larger beak. I don’t think I ever stopped to look at the subtle differences between the gulls before. It was pretty cool to realize we had three different types in our little spot of the beach. A few tree swallows were also zipping around above us, but I don’t think I got any pictures of them.

We headed back to the hotel for a quick swim and rested up for the Fishing Derby in Muskegon. We were hoping to make it to the Muskegon Conservation Club  in the morning, but the forecast was calling for rain all day! To check out our fishing derby experience, check out Our First Fishing Derby blog post.

After the kid’s success fishing, we went back to the hotel for another hour in the pool and decided to head to P.J. Hoffmaster State Park in Muskegon. I had been to the park once as a child and have fond memories of earning a Junior Ranger badge with my younger sister. The weather turned out much nicer than predicted and by the time we arrived we were overdressed in long pants and long sleeves as the sun came out and the temperature hit close to 80.

P.J. Hoffmaster State Park had a beautiful visitor center with exhibits of many of the birds in the area. They had a different set up for each habitat and our kids loved to get to see them up close (they were dead of course, but real, so that was cool).

We (ok, I) decided a short trip up to the dune overlook would be short enough to warm the kids up, but long enough to see some interesting plants and hopefully a few birds.

Yeah. The trail is straight up. Lots of stairs, a couple benches for a quick break and back up to the top. Fine for the adults, if we had been wearing shorts, and the kids were done about half way. We made it to the top to admire the beautiful view out over the dune to Lake Michigan. As you can see by the pictures, the kids were less than thrilled. 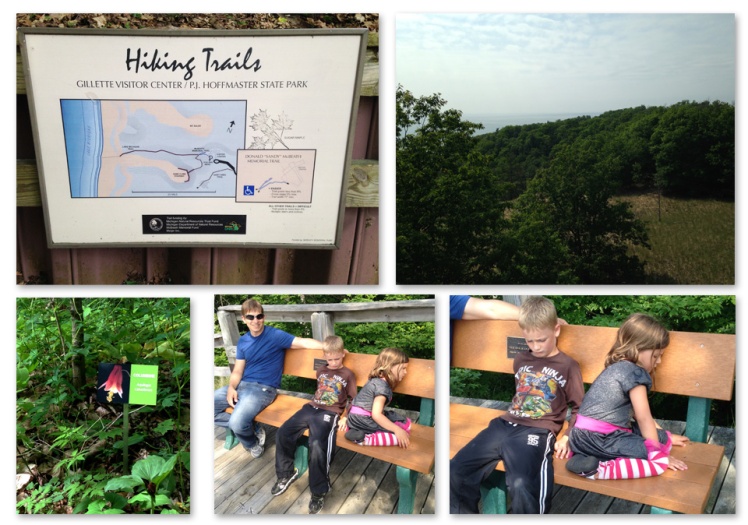 Since the Dune Overlook provided plenty of hiking time for the kids, we went back to the hotel, changed into lighter clothes and left for Grand Haven’s North Park Beach.

North Park Beach is a county park north of the channel at the Grand Haven State Park. It is much smaller, less busy and the sand was cleaner. Although we noticed that the grass had started growing up in some areas, and if you have ever stepped on a pointed spear of beach grass, you understand the pain this can cause! The kids played in the sand and water while my husband and I tossed a frisbee around. (We play Ultimate so anytime we can throw a disc is great!) 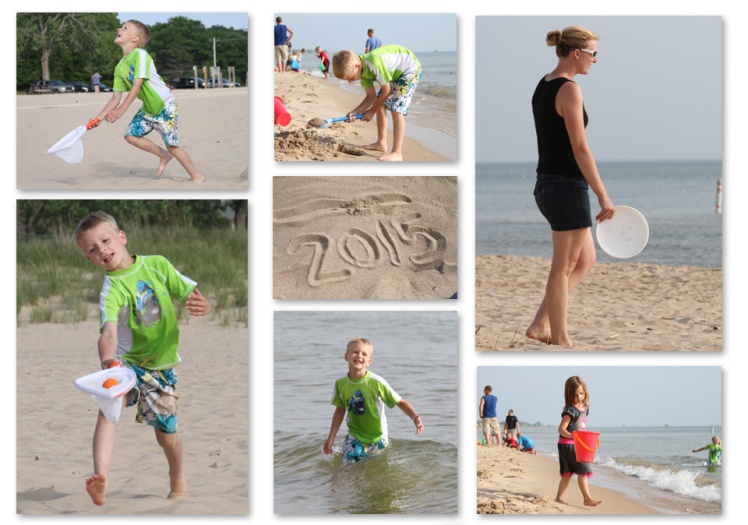 We hung out at the beach for a few hours and left just before sunset. We had dinner at Stanz Cafe and went down to the pier to try a little more fishing. The pier was crazy as families headed from the park to the Musical Fountain, which started around 10 and our kids were pretty tired, so we decided to wait for that for another time.

It was a great little weekend getaway and we packed in everything we could. Thankfully the weather held out for most of it, but rained most the day Sunday, so we headed back to Lansing a little earlier than we had planned. Leaves more to explore next time!

To learn more about these great Michigan Beaches check out the links below!

Talk to you soon!